Plastics. From the devastating effects of plastic pollution on our oceans, to the news that plastic bottles likely pollute the drinking water they contain, plastic pollution—the theme of this year’s Earth Day—has been a highly visible issue, and we’ve seen some notable progress on fighting the plastic battle.

Pushed by NGOs and government regulations, some companies are changing the way they produce and dispose of their plastic waste. But to really begin reducing the impact of plastics on our environment and health, these efforts will have to grow across the globe. China, which is estimated to be the source of approximately 1/3 of the plastic pollutionclogging our oceans, has taken steps towards remedying its significant impact through a combination of policies and citizen-based action. The China Environment Forum talked to Mao Da, founder of China Zero Waste Alliance and co-founder of Rock Environment and Energy Institute, to learn more about how fighting plastic pollution fits in to China’s plan to be an ecological civilization.

China Environment Forum: What are the largest challenges China faces in regards to plastic pollution, and what approach is China taking to overcome them?

Mao Da: The problem of plastic pollution is huge—it’s not only a waste problem; it’s a natural resource problem, a production and consumption problem, and lifestyle problem. It is a comprehensive issue, and within China the scale of it is huge. It is impossible to face a problem of this scale without adequate high-level national policies that adopt a comprehensive and integrated perspective. We do have some laws and policies related to plastic pollution [the 2008 restrictions on ultra-thin plastic bags, the 2018 plastic waste import ban, the 2017 plan for mandatory garbage sorting in 46 Chinese cities, and developing plans to ban other forms of plastic waste in 2018]. However, these laws are fragmented and they haven’t managed the solid waste problem well, much less plastic waste.

I think China can learn from the European Union, which is currently discussing a general policy on plastic waste. Since plastic is a cross-boundary and cross-sector issue, there is no single law, policy, or regulation pointed at one facet that can cope with this huge problem, so we similarly need a national, high-level, general policy to deal with plastic pollution. Such a policy needs to contain basic principles for dealing with plastic pollution, and these principles should be similar to those of the EU, which has a hierarchy principle system that has been adopted by many other countries as well as the UN system. 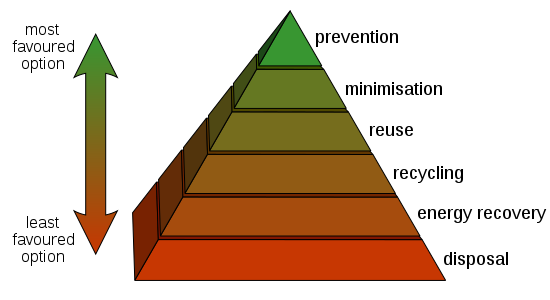 This hierarchy puts source prevention as a priority, which means we need to avoid unnecessary production of plastic products. Following that is separation and recycling, and finally disposal at the bottom.

In addition to a hierarchy, China needs an overall goal—that by a certain year we will reduce our plastic waste generation and use of natural resources to produce plastic by a certain amount.

They reached out to the public for recommendations on this process, and China Zero Waste Alliance contributed advice. To a large extent, China Zero Waste Alliance agrees with NDRC’s strategy, but we also emphasize eco-design of products that are better suited for recycling and pose less harm to environmental health. We had five main suggestions regarding China’s policy planning, including:

MD: We see the plastic ban as a positive because the basic rationale behind it is to protect the environment and peoples’ health. We have suffered many years from importing the dirtiest plastic waste. The government wants to promote domestic plastic recycling and waste separation, but if the recycling industry relies on imports there’s no incentive for them to recycle domestic waste. I know there is a global impact in the short term, creating some problem such as piles of plastic waste that cannot be shipped elsewhere to be taken care of, and China’s plastic recycling industry is struggling to do business. However, the immediate benefit is that we reduce our pollution from secondary waste recycling. Beyond this, in the long term this policy pushes every country and region to create their own recycling capacity, and only when they have their own capacity will they implement stricter regulations on the generation of plastic waste, separation, and control of the recycling process. There will no longer be a way to ship waste away and these countries will now need to care more about their environment when they have to handle the recycling themselves.

CEF: How can international coalitions come together to work towards reducing plastic pollution?

MD: There are many things to be done across three levels—the government, corporate, and NGOs. On the government level, the most important thing is to discuss an international legally binding treaty on curbing plastic pollution. Additionally, governments should share more information and data on plastic pollution, and based on that, discuss effective ways to address the problem. On the corporate level there need to be initiatives to get multinational corporations that are plastic producers or users of plastic packaging to work together to standardize plastic material use and plastic separation and recycling. Finally, NGOs are already working together to push the government and companies to do their job, while also approaching normal citizens to be more aware of this issue. For example, China Zero Waste Alliance is part of an international network, Break Free From Plastic, and we have thus developed our three pillars of action:

Mao Da is the founder of China Zero Waste Alliance and co-founder of Rock Environment and Energy Institute.

Written by By Lyssa Freese. Interview originally appeared at https://www.newsecuritybeat.org/2018/04/default-post-3/